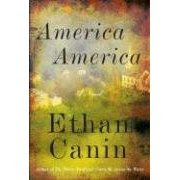 So begins America America by Ethan Canin, a drama that takes readers behind the scenes of an influential New England family, a presidential campaign, and the secrets that are inevitable when ambition, money, and vanity combine.

In Saline, New York, the power lies squarely with one family, the Metareys, who own the most land, run nearly all of the town's businesses, and employ the majority of its citizens. When Corey Sifter, whose family lives on Metarey land and whose father works on Metarey projects, gets called over to the main estate to work on the land himself as a teenager, it's a pivotal point in his young life.

As time progresses and Corey forms relationships with members of the Metarey clan, he finds himself immersed in their inner circle. It's at a critical time, too, for the family becomes involved in a powerful senator's bid against President Nixon that will change everything...and everyone.

The family's generosity paves the way for Corey's future, including his schooling, but that generosity also comes with a debt, one that will inevitably have to be paid. That debt is called in one night, in the form of a single, split-second event that Corey Sifter will reflect on for the rest of his life.

This is a powerful story, told in flashbacks from the early seventies to the present, between Corey as a young man and Corey as an adult, now a father. It's a dichotomy between the upper class and the working class, and what happens when someone moves from one world to the other, if in location only. It's a novel of loyalty and fierce admiration for someone outside of one's own family, a benefactor generous beyond imagination. And, it's a cautionary tale of what happens when power trumps the truth.

There was a lot of this book, in its style, that reminded me of Bridge of Sighs by Richard Russo. If you like Russo's work, it's a pretty safe bet you'll like Ethan Canin. It's the kind of book I'm immediately drawn to, a sweeping family drama spanning years and exposing secrets, and it did not disappoint.
Posted by Jill at 10:49 AM

I'm adding this title to my TBR list. I absolutely love Richard Russo so I'm now curious about this author. Good review!

This sounds like an interesting one. Maybe I'll check it out.