Today marks the release of My First New York, which features "candid accounts of coming to New York by more than 50 of the most remarkable people who have called the city home" from New York Magazine.

I can't WAIT to read this...and it inspired me to share my own "early adventures in the big city."
I moved to New York from Alabama three months after graduating from college. Talk about a fish out of water! I had only ever been to NYC twice before...and one of those visits was for my job interview.

I arrived on the Saturday before Thanksgiving 1997, so, naturally, I didn't return home for the holiday. My then-boyfriend and I headed down to see the Macy's parade in person, but the weather was really cold and windy that day, so we didn't stay very long. In fact, that was the year the Cat in the Hat float caused that horrible accident.

We had "Thanksgiving" lunch in Chinatown, and the waiter recommended the house specialty, salt and pepper prawns...with the shells on. I remember balking at eating the shrimp without peeling them, and the waiter insisted, coaxing that it was "good for the nails, and good for the teeth." As everyone else I knew was eating turkey that day, I remember feeling very cosmopolitan.

As overwhelmed as I often felt those first few weeks, I always felt the sensation that I was where everything in the world was going on, a 22-year-old's perception of being in the epicenter of the universe. And, in the two years of my residence, while I became adept at living there, I never lost that initial feeling of awe for the city. 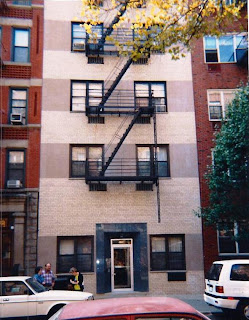 My apartment building
I lived on the Upper East Side, on 77th Street
between 1st and 2nd Avenue 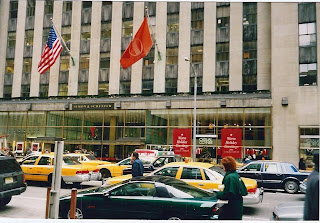 I worked for Pocket Books, an imprint of Simon & Schuster.
Our office backed up to Rockefeller Plaza. 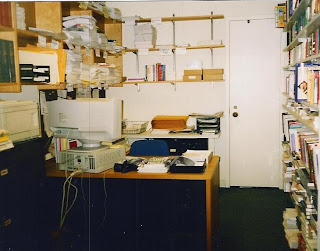 I was the editorial assistant to the editorial director of Pocket.
Here is where all said assisting was done.
Posted by Jill at 8:00 AM

I absolutely loved reading your experiences in NYC. I lived in the Village from '84-'88 and loved it.

Thank you so much for the notice about this book!!! I may have to buy it today. I ADORE NYC. I've only been there once (this past October 09) but I had always wanted to go there. And I absolutely loved it just as much as I thought I would. I would absolutely love to move there, but the only thing stopping me is I don't think I can leave my family here. But I wish I had it in me to! In the meantime, my DH agreed to let me visit the city often. ;) In fact we hope to go up for a week for upcoming BEA/BBC.

Loved your story about how you moved there and the pictures! I also would love to work in publishing.

I really enjoyed reading about your experience in NYC. I also loved seeing the pictures. I use to live in upstate NY and while I rarely got to the city I now truly regret not spending more time there.

I love this post! Now I'm curious about where you went to college. Do you ever miss New York?

Thanks for sharing your story and your pictures. I also moved to NYC for a brief time when I was 22. Congratulations on landing a job with a major publisher and a place on the Upper East Side!

Wow, this entry must have taken you back! I have been to NYC a few times. I love to visit, but can't imagine living there. Chicago is fast paced enough for me. This book looks really good! Thanks for sharing!

i love nyc. i went there for the first time last summer and i am itching to go back (and possibly live there). and how awesome is getting paid to read books!... that is why my dream job is to work in publishing.

Thanks for sharing these great photos...it looks lovely. ah to be an assistant!

That desk was certainly piled high.

Thanks so much for sharing your first New York experiences. They sounds fantastic. I have dreams of living there someday.

Jill...this is so fascinating. I never realized you lived in NYC. Thanks for sharing the pictures too...very fun. Did you just stay 2 years?

I love this post! I moved to NY after college too, in 1991, and lived on the UES not far from where you lived. Are you going to be at BEA? I'd love to meet you!

BTW, great blog. I just signed up as a follower.