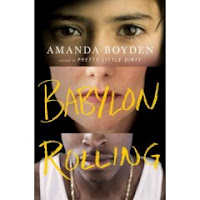 "We choose New Orleans. We love a place that cannot be saved by levees. We are brilliant losers. But, of course, those of us living Uptown on Orchid Street do not know this yet. Katrina is a year away."

I'm a frequent visitor to New Orleans...I love the history, the language, the food, the diversity of the residents, the sense of being in a place unlike any other. Many people can't get past the debauchery and think that's all the city has to offer, but they're wrong. Such is my love affair with the city that when I see a book about it, especially a novel, I can't wait to get my hands on it.

Babylon Rolling by Amanda Boyden examines the lives of a melting pot of families on one street in uptown New Orleans. The novel brings together a mix of races and origins, all forming their own community within their own little square of the Big Easy. The book examines the lives of residents beyond the parade route, beyond the French Quarter and Bourbon Street, beyond the tourist havens...those getting up and going to work and living normal lives in an anything-but-normal city.

Five families form the narrative, ranging from a transplanted family from Minnesota, a new-to-the-neighborhood Indian family, a couple in the midst of a cancer battle, a large family with a host of troubled children, and long-time residents just trying to keep the peace.

Despite their proximity to one another, they're all living largely separate lives, until one accident changes the landscape of the street forever. With it, both physical and psychological damage is inflicted, and the neighbors must come together like never before.

The title of the book refers to a Mardi Gras parade: "Babylon rolling, the marching bands drumming..." although Mardi Gras is the least of this book's focus. It's an in-depth look into the uniqueness of the culture of this Southern city, and what happens when relationships cross lines of demarcation.

Let me say that this book is not for the faint of heart. It's a gritty and tragic story...a collision course headed to no good end, but the story line is so engaging that it pulls you through to see how these characters will fare. It's no surprise that it's written by one of the city's own...no outsider could capture the personalities and the area so precisely.

It's by no means a beach read, but if you're looking for a character-rich drama set in this famed Southern city, don't pass this one up.
Posted by Jill at 9:40 AM

Nice review. What other New Orleans books do you recommend?